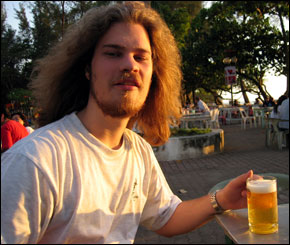 As you may well have guess I am Robert, and as you must know by now, I am the author of this, a stunning website.

Apart from publishing vain ego-inducing photos of myself so that thousands around the globe, (and possible in other places), can enjoy the internet to its fullest this site is also a place they can see my works of animated brilliance whilst on the toilet using their wireless bluetooth palm pilots, or have photos of me and my life beamed directly into their brain while they sleep.

I'm usually described as having hair, big hair. I guess it's not completely unfounded, as I do have hair, and as you can see on the left, it's quite bushy. Scary thing is it just grows like that, doesn't need any encouraging at all, it just blooms all over my scalp.

Want to know a private secret ( well it was until I decided to write it here ) ? I'm gettin grey hairs already at the age of 20!! You can see them on the left side of my forehead ( that's your left, not mine ).. It's just about visible in the photo above.

My 21st birthday has been an gone, and so you know how I spent it? Working my arse off and sleeping to recover from said work. And you know the worst thing about that? I was really relieved about it - I was very stressed and tired, so all in all I was very pleased. Of course in hindsight I wished I'd made a big fuss and gotten hammered with my mates, but nevermind - locking myself in my room to work will obviously be more rewarding in the long run.

Other than dribbling over keyboards, and thinking "I really should do some work" I also enjoy the following:

I am also a fan of cartoons and films, in that order. I find that cartoons are more creative and so more interesting I will list some of my favourites

and there are many others, but I always forget their names...

Amazing that you made it this far, so you now know a fair bit about me.. can't think why I am publishing this stuff here, maybe it is incase I forget and need reminder of what I enjoy doing!

Other things of interest

An ICQ message that got off subject... (and a little long)

Sometime in the Summer Term 2001

no www ... batty.. damn I hate all these resrictions, these rules, these
filters, all this damned censorship.. I want to be able to use the internet
when I WANT to, I want to be able to look up interesting things that are not
politically correct, I want to educate myself in the ways of security, I
want to become an active member of an online community, such as newgrounds,
I want my online presence felt - I want contact with people outside this
hole, this prision - deciet is the weapon of this place - hidden amoungst
its trees and on top of its hill - it decieve people like me into believing
that I have freedom - and that I am not trapped - but unfortunately the
prison is not physical - as with freedom - it is in the mind - I am forced
to comply with things I do not agree with, to stand and listen to things I
am not interested. Above all I am forbidden my interests - school are meant
to be nuturing environments where we learn.. what have I learnt sine I came
here?
Some bullshit about quarks and nutrons, some common sense shite about the
liver and hormones. The one useful thing I have learned is Maths, and
perhaps the art of trickery, of being a convincing liar, or decieving others
as to my drive and intentions.
But I grow tired of acting - I want release and I want it now. I am not a
puppet, I am not a realy person - what ever happened to when men were men?
Fight Club put it very well - "we are a generation of men brought up by
women" how sad and true. I am worse off than that - I am a modern day sissy,
worse still I am a puppet - complying with dumb rules - obeying old decrpid
teachers who know less about the world than I
Take that dickhead Povey - always going on about being a real man - what the
hell does he know about being in the real world? I am twice the man he is -
I have lived in many places - lived a childhood with out a proper
foundation - the only constant thing in my life being my family, friends
came and went, along with everything else. I have experienced purity whilst
protected from the arogance of the "1st worlds" - the worlds where sex is
something you trade for a drink, where values are only upheld if the law
dictates it - where people live by the law - everyone is enprisioned. God
damn this sucks.

This is how I feel - and now that I have it all written down I feel better.

It may be useful for you to realise that I was born in an Expat camp in West Malaysia, near the Brunei boarder, I then moved to Damascus Syria. So I have followed all the news and happaning around the world with an unusual view. For one, living in Syria has had a small part in fueling my hatred of the US, which is not a personal thing, nor do I hate the americans ( well.. I don't like their accent, but who does? ) I am just anti-establishment. And ths US treats the less powerful countries like children. More irritating than any of that are a few aspects of US society. I am of course referring to their television. I have noticed that in all the majority of their films and series the "foreigners" love the US, and think that everything is great there. It appears that most people accept this (this is my 2 cents on the subject, so don't bother sending my hate mail, it won't do you any good).

In my opinion the US is behind the rest of the world in may respects, not economically ( how could they be? everything revolves arond money.. ) but in other sense, values and morals, things like relationships are all going to hell. Not to mention the number and frequentness of violent crimes. And I see the rest of the world following in their footsteps, which is a shame - if only becuase of the loss of culture.

However, I am softening up to the idea that the US is not all bad.. maybe I should live there before I condemn them.